A few weeks back I started hunting for a turntable and amplifier. My dad had his old kit boxed up in my parents' garage and he was happy to give the NAD 3020 amp and Onkyo CP-1010A turntable a new home!

After connecting all the gear, everything sounded good (so, so good), but occasionally the right stereo channel would drop out. A sharp tap on the amplifier would bring it back. Apparently this is symptomatic of failed or failing capacitors, because electrolytic capacitors are generally not designed to last 30 years or more.

I found the service manual for the NAD 3020 online and was amazed to find a full design circuit diagram, parts list, and labelled circuit board wiring diagram. Replacing the caps was going to be easy.

I put together a quick parts list of all the capacitors I had to replace - 42 in total. Only the electrolytic capacitors required replacement because the conductive electrolyte inside them can (and did) leak over time. The ceramic and mylar capacitors inside all passed a visual inspection.

I placed a Digikey order (~$60 for the bare minimum parts but I ordered spares and ended up around ~$90) and warmed up my soldering iron. Sure enough, a good number of the caps were trashed: 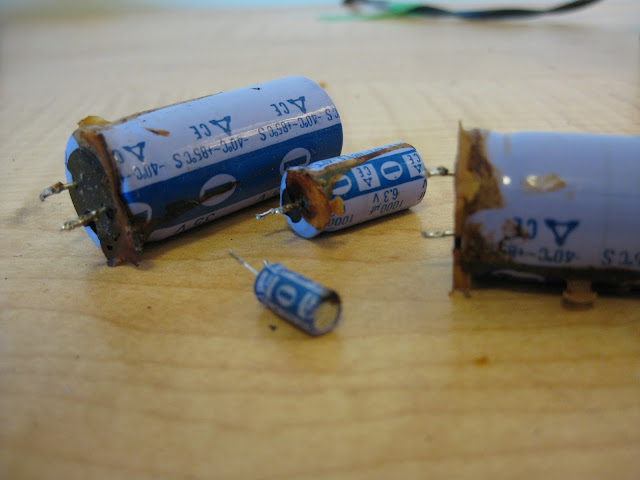 One daugherboard with caps removed. You can see the gunk where the electrolyte leaked in at least two places. 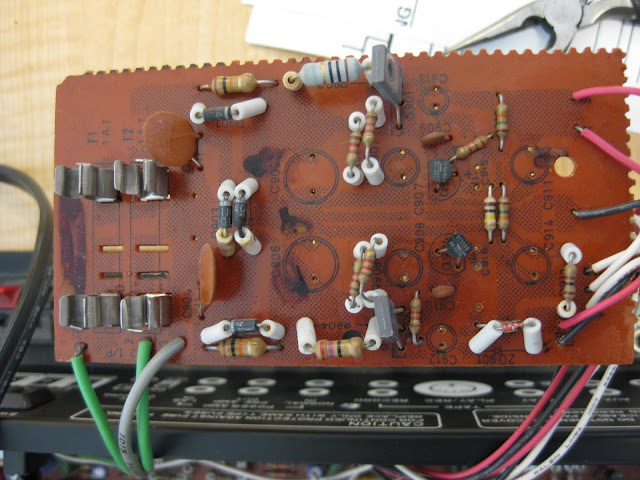 The order arrived and I started installing new caps Here's that daugherboard back in place. Anything blue or gold in this pic is brand new: 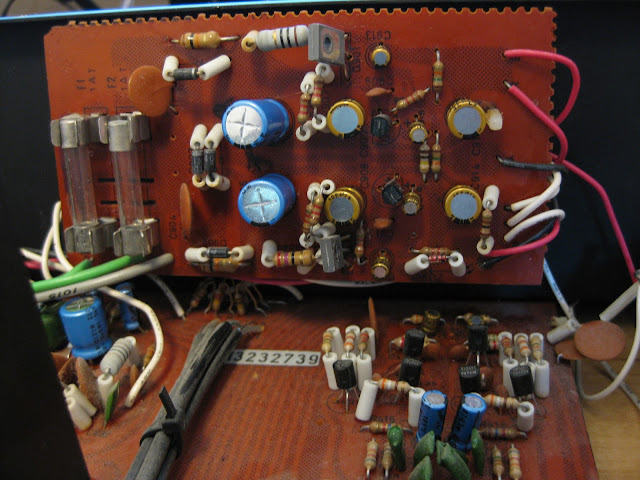 These 2200 μF caps were the biggest, and replaced 4 completely trashed caps on the input power filtering (I think). All the new parts were different brands and dimensions than the old ones, but that's okay. For cap replacements, as long as the capacitance is the same and the voltage rating matches or lightly exceeds the original, you should be good. Or so I read. 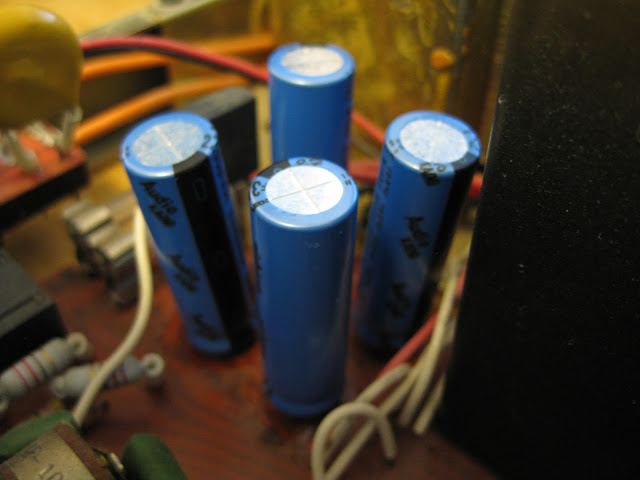 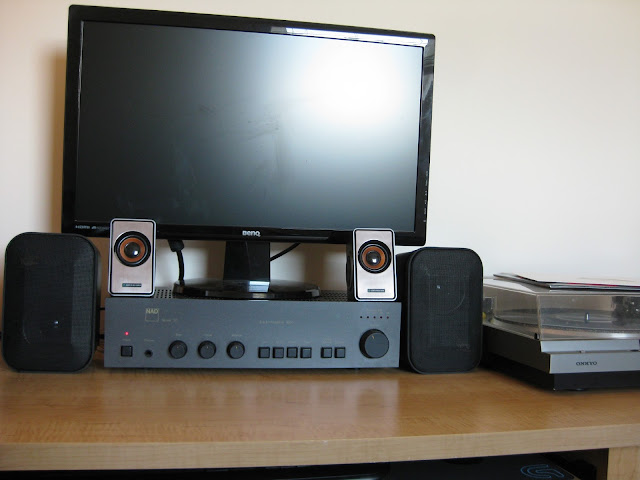 The first thing I noticed was that everything sounded a bit sharper, but the amp still has a beautiful warm tone. When I listen to music on this setup, I am amazed to hear new details in songs I've heard hundreds of times - instrumental trills, soft vocals, basslines, and more.
Posted by Brahm at 1:57 PM 0 comments

Labels: metal, music, nerding, products that are awesome
Email ThisBlogThis!Share to TwitterShare to FacebookShare to Pinterest

Not only did I want to check my score on mobile, I thought having easily accessible scores on mobile would make things more engaging for the whole league!

I wrote a python script to scrape values from MLB servers and display them in a simple interface:

The basic flow of the script is:

I wrote most of this blog post a month ago, intending to add more features and make a richer blog post. Sadly, like many of my projects it has stalled at nowhere near completion and I have not put in any time over the last 4-5 weeks!

But if you are running an MLB.com fantasy league and you want a better mobile interface for your members, check out my project on Github: https://github.com/b-neufeld/mlb-fantasy-checker
Posted by Brahm at 10:30 PM 0 comments

At work we have a Foxboro I/A control system. I was getting a lot of requests to take screenshots of control system graphics - which I don't mind fulfilling, because usually someone wants to make something better.

I wanted a better way to fulfill these requests! Something that can do everything at once.

I found an old post on the "Foxboro Freelist", a user-run mailing list for Foxboro system maintainers. Back in November I posted an improved version, but I have improved it again since (continue reading).


Since coming up with this script, we generate screenshots of 200+ graphics on a monthly basis and drop them in a network folder on our Business LAN. This way, anyone who is interested can take a look at the current state of the control graphics, find errors and suggest improvements.

Drop me a line if you find this through Google - I'd love to know if this helped you out!

Update 2016-05-27: I've put this up on Github so people can download the .ksh directly, or contribute to making it better! https://github.com/b-neufeld/fox-auto-generate-screenshots
Posted by Brahm at 7:00 PM 0 comments

More Great British Bake Off-inspired cooking - I made Quiche Lorraine today. I've never made a quiche before in my life! It was fun and delicious.

I found this recipe that was the main inspiration, but I wanted to add broccoli so I took some hints from this recipe too. I also have a 22cm tin and the recipe called for 20cm, so I tried to scale everything up a bit.

It was GREAT if I do say so myself! Could have used a bit more salt, a bit more filling overall, but I'd make this again for sure. 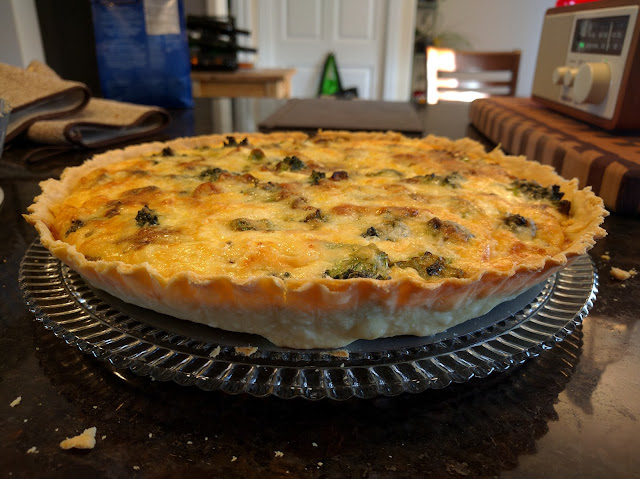 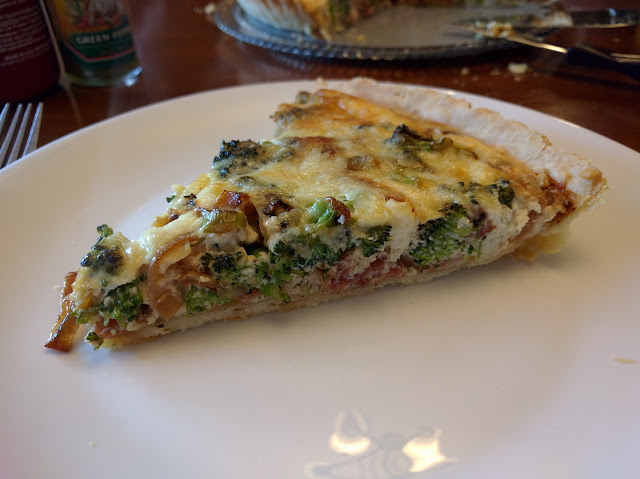 Robyn got me hooked on this show called the Great British Bake Off. It has inspired me to try baking a couple of the tastier looking things on the show. 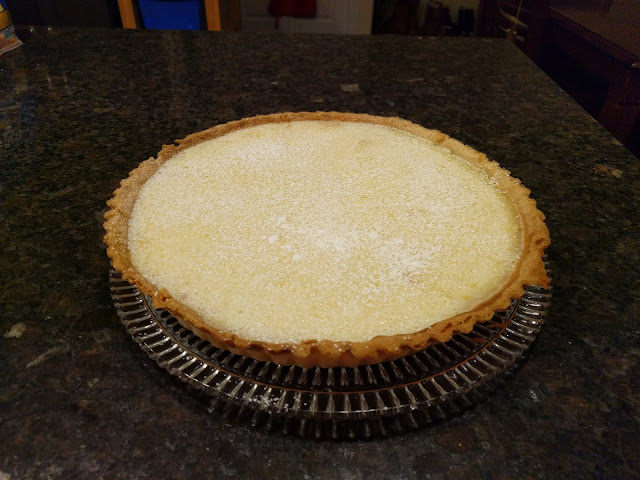 Not bad for a first crack!

Here is a fruit tart that uses the same sweet crust recipe as the lemon tart, with a crème pâtissière (from this recipe) filling. The crust turned out nicer looking this time: 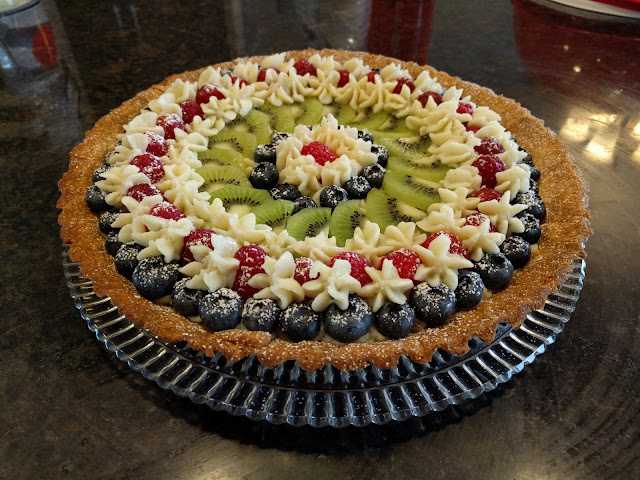 The recipes are brilliant because they're in grams; you can't possibly muck up the measurements.

I made one slip up on the fruit tart. I used Masa Harina for "corn flour", but I should have used corn starch (only the US and Canada refer to "corn starch", the rest of the world calls it corn flour"). It still tastes fine, but the texture is a little bit off. The other UK-ism is that caster sugar is sold as berry sugar in Canada.
Posted by Brahm at 5:59 PM 0 comments

Labels: being domestic, food, fun
Email ThisBlogThis!Share to TwitterShare to FacebookShare to Pinterest

In 2013 I read about Soylent, a "nutritionally complete" meal replacement beverage invented by a software engineer, who started a 30-day experiment to see if he could survive on the stuff. His experiment morphed into a crowdfunding campaign with a feed-the-world-cheaply theme and he raised millions of dollars to start mass-producing it for sale.

Do people need "real food" to survive and thrive, or can we break food into its macro- and micronutrient components and reassemble those pieces to create something equivalent? Possibly better?

A lot of people were intrigued by the same question and the "powdered food scene" seemed to grow a lot in 2013 & 2014.

The shipping date of Soylent to Canada was never confirmed. When I started getting serious about losing weight in 2015 I started doing some research on homemade, powdered food meal replacements. The appeal was:


As it turns out, Soylent (the company) hosts a recipe section on their website where users can submit and review recipes.


I found one called Schmilk Chocolate that I thought I'd try. It uses whole milk as a source of fat and protein. I made a batch and had it for breakfast every day for a week. It was pretty good! Bland, but not offensively so.

Since early summer 2015, I have been eating/drinking this homemade Soylent every workday for both breakfast and lunch. For supper and meals on weekends I have "real food". I have observed no ill-effects whatsoever (including excess flatulence, which some Soylent users had trouble with).


Now that I'm basically at my goal weight, I don't think I am going to stop with Soylent any time soon. It's a part of my routine, and something I miss if my routine is interrupted.

Labels: food, health, nerding, products that are awesome
Email ThisBlogThis!Share to TwitterShare to FacebookShare to Pinterest

I think I've got this weight loss thing figured out.

In Montreal in 2011, I started writing a blog post called "Losing weight with common sense", because I was going to make all of these "sensible" changes to melt off the pounds, and hold myself accountable by blogging. Thankfully, I never hit the submit button, and those sensible changes - like eating an enormous plate of salmon and broccoli with a side of four beers and a half bag of chips for an evening snack - never paid off.

I've been overweight since my early teens. By World Health Organization standards, that means having a BMI of >25. In at least part of my high school years I was obese (>30 BMI - at 6'5" that's >114.7 kg or >253 lbs). I wasn't interested in sports, and I sure wasn't interested in moderation. I didn't particularly care, and I didn't have the understanding/knowledge to do anything differently.

In October 2014 I got a Fitbit One to use as a silent wake-up alarm, because Robyn couldn't stand my old alarm clock. Putting a step tracker in my pocket piqued some interest in weight management and I started occasionally tracking my weight for the heck of it. I clocked in at 113.4 kg; just a hair under "obese" on the BMI scale.

In November of that year, Robyn's dad passed away suddenly and unexpectedly. He was in his 50's, healthy and active. This was shocking. I started thinking - a lot - about the limited time we have on Planet Earth. I was 28; about half Paul's age.

By Spring of 2015 I had been fiddling with the Fitbit app, and mustering up inspiration to get serious about changing my habits, health and appearance. I had been reading posts in reddit's r/Fitness, r/loseit and r/fatlogic. r/fatlogic was actually the best inspiration - the subreddit showcases examples of anything that "deviates from the scientific facts of body weight management". It was a wake-up call to recognize some of those behaviours in myself (those small internal justifications I made before smashing a whole bag of Ruffles All-Dressed potato chips).

I learned that diet is the key to weight management, not exercise (although I do not dispute the value of exercise!). I learned about calories, got a food scale, and started counting.

I couldn't believe how effective it was. I plugged in a weight loss target into the MyFitnessPal app (0.5 kg/week) and it gave me a calorie allowance. By maintaining the discipline to weigh and count everything that went into my body (and estimating generously when nutritional info was unavailable), the weight disappeared at a perfectly consistent rate:

A couple tricks I used to stay motivated:


Next steps - turn 30 in April with a healthy BMI for the first time in over half of my life, maintain current weight around the 85kg mark, turn remaining fat stores into muscle starting this spring when I can get out and start running again. That's a blog post for another day!