Robyn and I take off for Iceland today - my flight to Toronto (where we're meeting) leaves at 4:30pm. I could have gone into work this morning, but I decided that working is no way to start a vacation! My colleagues agreed. So I slept in a bit, walked to grab a coffee, and I'm just forging some breakfast now in my MEAL-FORGE (kitchen).

A few pics from the last week: 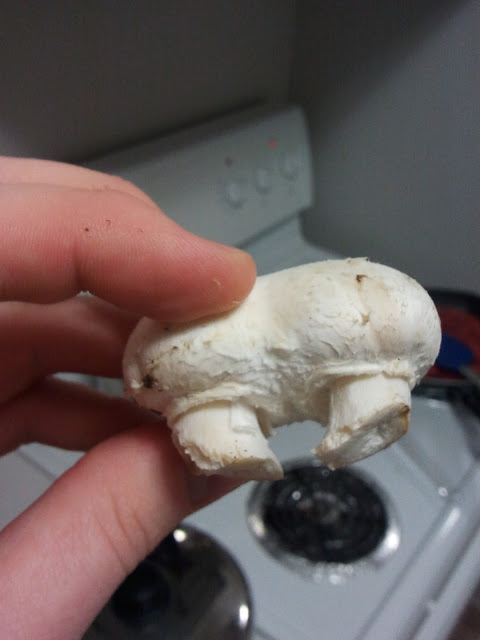 Last night's supper - George Foreman-grilled zucchini and pan-fried salmon. Turned out great! Although today my apartment smells fishy. Worth it. 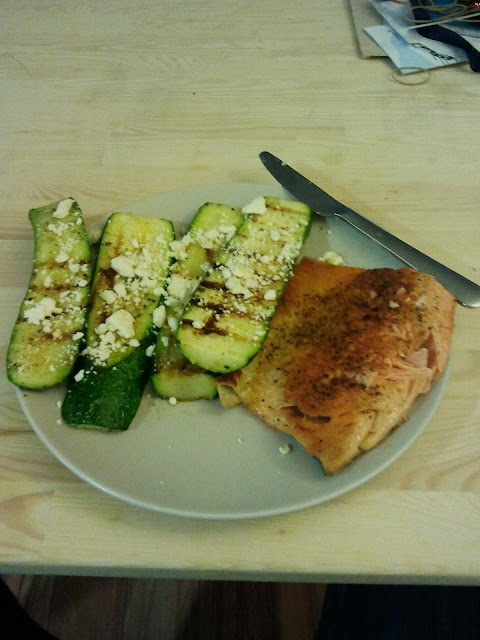 The view! It's finally starting to turn green here. I'm sure it will feel like a different city by the time I get back. 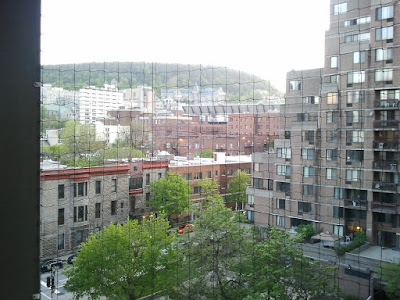 Check back in two weeks... I am sure I'll have some amazing pictures from Iceland! Meanwhile, if you're curious what the weather will be like while we're there, visit this site.
Posted by Brahm at 7:29 AM 0 comments

A year or two ago, I went on a huge documentary kick. As a kid and young(er) adult, I hadn't seen many documentaries I enjoyed, but suddenly started discovering them at a very rapid pace.

Here are a few I've enjoyed - some popular, some obscure - in alphabetical order. If you're ever looking for an interesting non-fiction flick, I'd recommend one of these:

The Battle of Chernobyl (watch online at this link) - A fascinating, edge-of-your-seat documentary about the events leading up to the Chernobyl disaster in Ukraine, and how the local (and eventually, international) authorities saved the world from an even bigger disaster. There is tons of great historical footage and all of the science-y stuff is explained clearly. This is a fast-paced documentary that watches like an action movie. If you watch one movie from this list, watch this one.

(Bonus reading: check out the New Confinement Chamber that's being built over the old protective sarcophagus at Chernobyl.)


The Devil and Daniel Johnston - All about the rise and fall of a genius singer-songwriter who produced a massive amount of art (music, lyrics, drawings, and more), made an enormous impact on the indie music scene, but faded into pseudo-obscurity due to crippling manic depression and mental illness. I'd never heard of this guy before a friend recommended this film, but after watching it I can say with certainty that Daniel Johnston deserved to have this movie made about him!

Helvetica - Don't tell yourself that a movie all about a font (ie, a typeface) won't be interesting. This documentary covers the creation and evolution of the Helvetica typeface and how it has permeated art, business, and popular culture. Plus, once you're done, you'll never be able to un-notice this font (kind of like once you know about the secret arrow in the FedEx logo, you'll never un-notice it).

King Corn - This one is almost as hard to explain as Helvetica! It's all about corn. Corn that we grow, eat, and turn into fuel and other products. The filmmaker grows a crop of corn all by himself, and follows his produce through its lifecycle, from seed to processing to product. This flick also covers a number of interesting (yes, interesting!) corn-related issues, like government subsidies for growers and the reduction in corn species produced today (about four, if I recall correctly, although there were hundreds of native species of corn when Europeans landed in North America).

Man On Wire - There are so many good things to say about Man on Wire. The story is amazing enough - it's all about a tightrope walker who spends years devising a plan to break into the World Trade Centre towers in New York City, fix a steel wire between the two towers, and tightrope-walk across. Like Battle of Chernobyl, this is a movie that will have you on the edge of your seat.

Rush - Beyond The Lighted Stage - This is the movie that turned me into a true Rush fan. A close and personal look at the history behind one of Canada's greatest bands. You don't have to be into Rush to find this movie interesting - it's a great story about three nerdy kids from Toronto who start making incredible music and hit it big writing wildly progressive music. A really great, engaging film - you feel like you know the band on a personal level after you've seen it.

This Film Is Not Yet Rated - An interesting look at the American movie ratings board, how movie ratings (G, PG, R, etc) are assigned arbitrary, how the ratings process happens behind closed doors, and who the mysterious organization hires to rate movies (and who those raters are connected to!).

Those are a few of my favourites! Leave me a comment if you've seen any of these, or if you know of another good documentary that I should get my hands on.
Posted by Brahm at 5:08 PM 2 comments

Last time I was in Saskatoon, Robyn and I went out for lunch with our friends Steph and Brett. Brett and I ordered a delicious lox sandwich, and I commented on how awesome if it would be if you could make it at home.

A foolish statement! Brett quickly informed me that it is one of the easiest recipes in the world. Take salmon, pack it in some salt, sugar, and pepper, and let it sit in the fridge with a weight on it for a few days. That's it.

I got it started last week (picture here) and pulled it out of my fridge on Thursday. Here's the results: 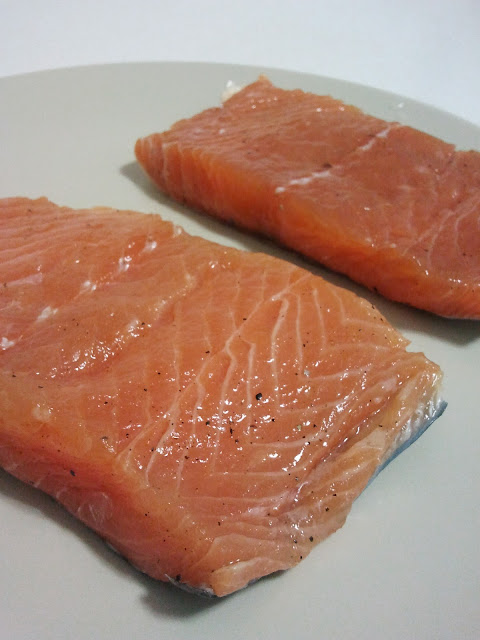 I cut a tiny piece off the corner and it was SO GOOD! I collected everything I needed to make a proper lox bagel with cream cheese: 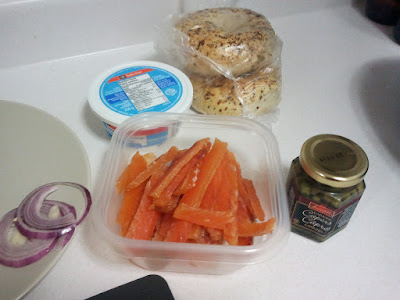 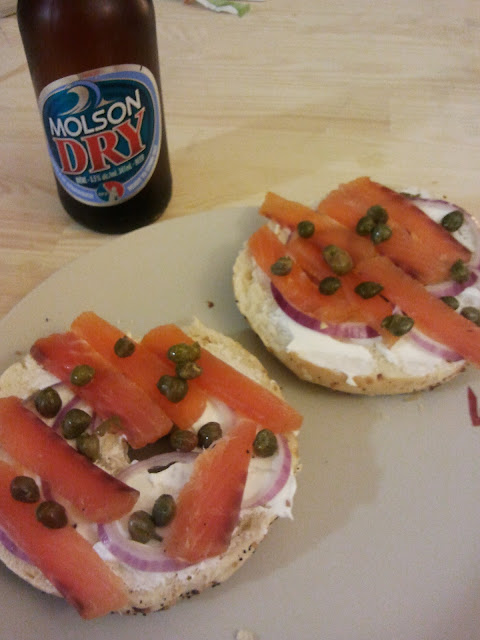 As soon as I took the first bite of the sandwich, I realized I'd made a mistake - it was WAY too salty! This was a two-part error. For one, I'd left it in the fridge in the salt pack for too long (a colleague suggested three days curing was perfect; I did 6.5), and secondly my slices, while thin, were still too thick.

Also, I was not a huge fan of capers (the green things), but I tried them because that's traditionally what's needed for this sandwich.

Next time: fewer days in the fridge, thinner slices, no capers, and a dash of smokey whiskey while it's curing to add some smoke flavour. I will attempt this again... and it will be good!
Posted by Brahm at 11:41 AM 0 comments

No sarcasm in the blog title, I swear! TicketMaster and I have a rocky relationship, but their customer service department just totally redeemed themselves.

A week ago, I bought a ticket to see the Montreal Impact play the Carolina Railhawks (this is soccer) on May 14th. A few days later, my dad said he'd be able to swing by Montreal on the way to Florida, where he has some work to do.

His visit overlapped the game, so I said I'd try and get a second ticket. I called TicketMaster sales and asked the girl I spoke to if there was a spare seat beside mine. She said there wasn't. I asked if I could return the ticket I had in exchange for two adjacent seats. She said she didn't know (she was Sales only) and transferred me to customer service.

I talked to this totally friendly guy named Quentin (I think). I quickly told him the story and his immediate reaction was "sure, that should be possible!" My expectations were far too low! To make a long story short, my total time on the phone for exchanging my lonely seat for two seats beside each other was 17 minutes, and there were no surprise service fees or anything like that for the exchange. At the end of the call I thanked Quentin and told him I was very impressed with the great service.

Good job TicketMaster! Keep it up!
Posted by Brahm at 7:16 PM 0 comments

Labels: consumerism
Email ThisBlogThis!Share to TwitterShare to FacebookShare to Pinterest

I am now a master of the amazing weekend brunch: 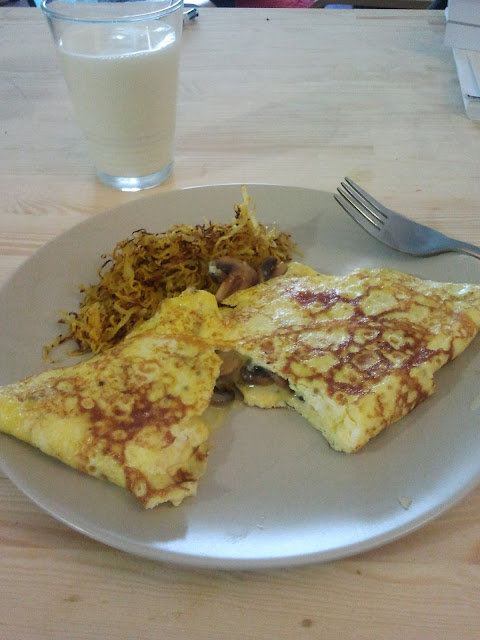 Mushroom and cheese omlette with spaghetti squash hash browns.
I also have a batch of lox brining away in my fridge for later this week: 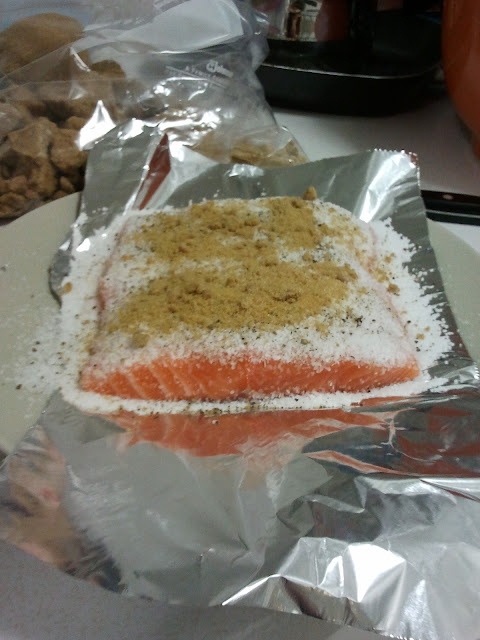 Salt, pepper, brown sugar, and time (about a week) and it will be done!
I have also been making a few batches of super-simple oven-fried fish! Very simple and tasty: give the fillets a quick milk bath, cover in bread crumbs and pepper, toss in the oven (high rack) at 450*C for 10-15 minutes. 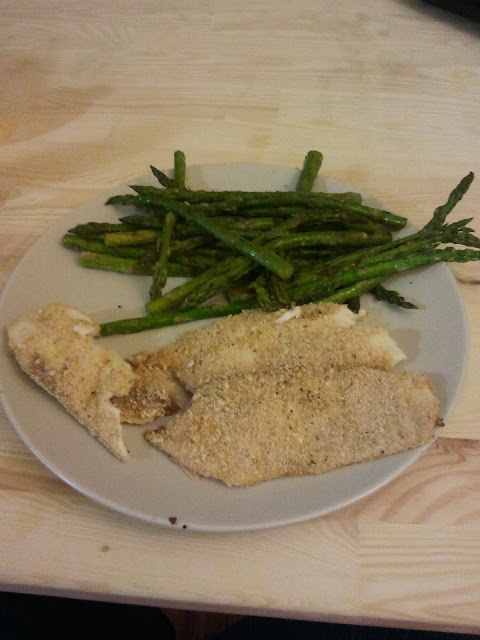 That's all for now... back to hovering on Twitter for election result info!
Posted by Brahm at 5:39 PM 0 comments