It's well-known that nuclear energy is expensive... or is it? What will it cost the people of Saskatchewan to build one, two, three, or four Small Modular Reactors (SMRs)?

This post compares actual and projected capital/project costs between four past, present, and future energy projects:

To evaluate the "bang for buck" for the people of Saskatchewan, we will dig into:

This post focuses purely on capital/project/construction costs as a) these are typically the numbers presented in popular media and b) SaskPower does not publish granular information to discern per-plant operating costs.

We'll also do a quick aside and look at volumes of fuel consumption by power plant type.

Sources and raw data are linked at the bottom of this post.

If you only look at one chart in this post, jump to the end!

Let's start with the power generation capacity of each asset.

Recall that power is the rate of producing or consuming energy; a 360 MW natural gas power plant can produce as much power as 3.6 million 100-Watt light bulbs consume.

Power generation capacity is deceptive when talking about intermittent sources: capacity is the maximum theoretical output of a plant under ideal conditions. To understand the total quantity of energy we can expect a power-generating asset can actually produce, we look at the capacity factor, also called utilization.

Capacity factor/utilization: out of all the time in a year, the asset is utilized "this much" of the time.

"Base load" assets run at very high utilization to provide reliable, stable, 24/7 power to the grid. Even base load assets do not run at 100% utilization as they require periodic planned maintenance.

It's likely that the first SMR would be run at the highest possible utilization in place of former coal assets. GE-Hitachi estimates the BWRX-300 will be capable of 95-96% utilization.

SaskPower's natural gas assets run around 58% utilization (last 5-6 years average). This is a feature, not a bug: it is easy to ramp natural gas up and down to "load follow" and match the instantaneous demand from homes, industry, and intermittent renewables. Natural gas is capable of running at very high utilization rates and in fact, I showed in my Path To 2030 post how increased gas utilization is likely in the coming decade.

Wind turbines are the most constrained. They generate power when the wind is blowing, and don't hit peak power generating capacity in lighter winds. Like all assets, wind turbines have periodic maintenance outages, but they can also be taken offline in periods of extreme cold weather. The 37% capacity factor I use here is confirmed from SaskPower's historical operating data and validated by another wind industry publication as typical for Saskatchewan wind assets.

Another important factor in evaluating "bang for buck" is the design life of an asset:

Boundary Dam Unit #3 CCS was designed for a 30-year lifespan. Great Plans Power Station and Golden South Wind Facility are both designed for 25 years. Of course, these assets may be refurbish-able too.

The final variable we need to look at to calculate "bang for buck" is, of course, the bucks!

Just hang on for another minute.

I've left many smaller sources of error in my spreadsheet, but I want to highlight some bigger ones:

Quick sidebar: I wanted to visualize the mass of fuel consumption for these power-generating assets. On the chart below, the BWRX-300's fuel is invisible because of the crazy-high energy density of nuclear fuel. Instead of a train's worth of coal every day, an SMR will consume something like a semi truck shipment's worth of fuel every two years.

Drumroll, please! Let's calculate which power generation asset is the best bang-for-buck for ratepayers in Saskatchewan.

First, let's talk about a flawed way to talk about the value of dispatchable vs. intermittent energy sources: capital cost per MW. This is easily calculated by taking the total capital project dollars of the project and dividing it by the MW of generation capacity:

This graph appears to tell two stories. One, that Boundary Dam was very expensive, and two, that Golden South Wind Facility is very cheap. Both of things are mostly true, but it's hard to fairly compare intermittent power against dispatchable power on a MW (or cost per MW) basis, since we can't control when we get the Megawatts.

Capital cost per MW is a useful comparison when we're in control of when we get the Megawatts.

If we're not in control of when we get the Megawatts - we've put something uncontrollable on the grid - we have to build other assets (like natural gas plants, batteries, pumped hydro, etc.) to help control that variability.

To visualize the quantity of energy that each of these assets can generate over their asset life, we combine MW of generating capacity with capacity factor/utilization and the life of asset to get this chart:

How to read this chart:

Look at the darker-shaded bars with the left-side vertical axis. This is the potential GWh of electricity delivered/generated per year.

Look at the lighter-shaded bars with the right-side vertical axis. This is the total potential GWh of electricity delivered over the total life of the asset.

The long lifespan of nuclear combined with its high utilization delivers significantly more energy than other sources. More juice for our televisions, potash mines, EVs, and homes. In this chart, nuclear is an inter-generational cast-iron pan, everything else is a $7.77 Walmart Teflon pan.

Note that Great Plains Power Station could increase utilization to deliver more energy, but CCS is maxed out and Golden South is constrained by weather.

This is the last chart... the important one! Let's take total project capital costs and divide them by the total GWh produced (i.e. the total electricity delivered to homes and businesses) over the total life of the asset. Again, that's the lighter-coloured bars and the right-side vertical axis on the above chart: 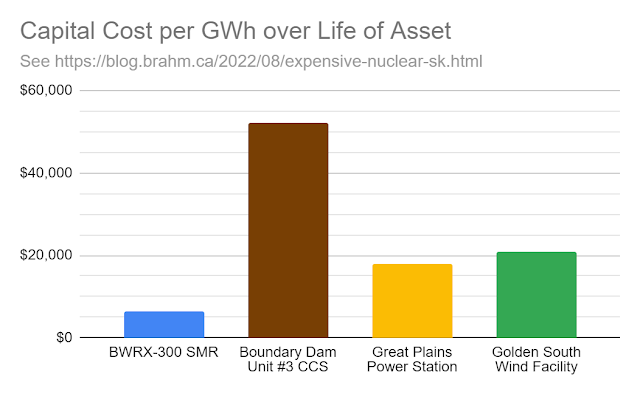 This chart shows the construction/capital/project costs to deliver 1 GWh of energy:

If we want bang-for-buck on power generation projects, nuclear-fuelled SMRs are a clear winner.

If you could influence which taxpayer-funded projects are built to deliver electricity to your home every month - electricity that you pay for in part based on its construction costs - what would you lobby legislators to build?

Let's revisit a possible source of error about the SMRs: capital costs may be a low estimate and not include compliance, licensing, and other project costs, which may be a lot higher!

This chart helps us understand:

A final variable worth mentioning are operating costs. Operating costs are what it takes to run the power generating asset: salaries, consumables (like fuel and spare parts), overtime, maintenance and repairs, etc.

Unfortunately SaskPower does not release granular OM&A (operating, maintenance, and administration) costs per power plant, so we can't calculate operating cost per MW (or MWh/GWh) for these projects.

I am not trying to be misleading in this post, so will emphasize this is all capital/project costs. In my opinion, many media sources are often unclear about if they're talking about capital/project costs or operating costs. My caution to readers is to always be aware of which costs are being discussed.

Labels: energy
Email ThisBlogThis!Share to TwitterShare to FacebookShare to Pinterest