In my last few energy posts (link 1, link 2) I've written about Saskatchewan's plan to transform our electrical supply away from coal and towards gas and renewables, both from an instantaneous generation (MW) standpoint, and total power delivered (GWh) standpoint.

Where does the gas come from? What are some of the unique risks associated with gas? How does the Alberta oil & gas industry affect our utility bills?

To learn more I read through SaskEnergy's 2021-22 (and 20-21) annual reports, located here. All page numbers mentioned below reference the 2021-22 report's numbered pages (not the PDF page numbers) unless otherwise indicated.

SaskEnergy (Incorporated) is one of seven Crown Corporations owned by Crown Investment Corporation of Saskatchewan, which is the intermediary between the Crown Corps and the Saskatchewan Legislative Assembly.

SaskEnergy is responsible for distributing natural gas, e.g. metering it out to homes, businesses, and large industrial customers. SaskEnergy has the "exclusive legislative franchise to distribute natural gas within the province of Saskatchewan." It also has four subsidiaries: TransGas (transmission and storage: the roots, trunk, and big branches, whereas SaskEnergy is the small branches and leaves), Bayhurst (a small gas producer), MIPL (interprovincial/state interconnections), and Call Before You Dig.

Saskatchewan uses a lot of gas.

Here are some stats from page 17 of the 2021-22 report with embellishments by yours truly.

In the 2021-22 reporting year, SaskEnergy sold 6,329,000,000 cubic metres of natural gas. A cube with that volume would have edges 1.85km long. This cube would cover the entire University of Saskatchewan campus and a good chunk of the nearby fields and river, including the whole train bridge. The gas cube would be approximately 1,760 metres taller than Nutrien Tower, the tallest office building in the province (at 88 metres). 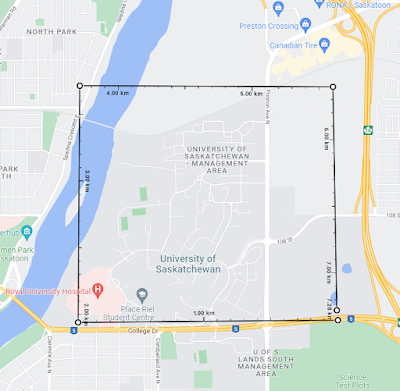 (Photoshop request: Saskatoon skyline with a 2km³ gas cube in the background)

The average residential gas customer in SK used 2,677 cubic metres of natural gas in 2021-22, which is just over the volume of an Olympic swimming pool (2,500 cubic metres).

The peak daily flow of gas in Saskatchewan was 1.65 petajoules on January 5, 2022, equivalent to about 44,000,000 cubic metres of gas. If you turned this volume into a perfect cube, it would be about 350 metres on each side, which is about 2.5 Costco stores (North Saskatoon location). 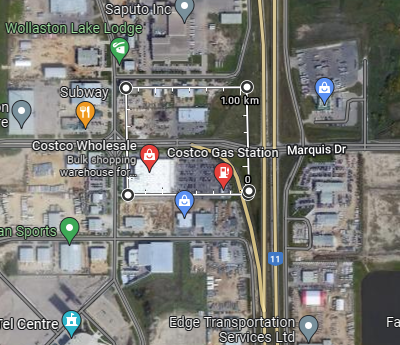 Why is SaskEnergy is hiking rates by up to 22.7% over the next two years?

A multi-year rate hike was announced a few weeks ago. For many, this is a hard pill to swallow given concurrent SaskPower rate increases (covered in my last post), inflation, and everything else going on in the world.

To understand the SaskEnergy rate hike - and the future of natural gas in Saskatchewan - we need to dive into a couple areas:

How Crown Corporations Work (at least in Saskatchewan)

SaskEnergy, like other provincial Crown Corporations, is a subsidiary of Crown Investments Corporation (CIC). CIC is wholly owned by the Province of Saskatchewan: the Crown (province) is the sole shareholder of CIC.

Wikipedia says, "Some Crown corporations are expected to be profitable organisations, while others are non-commercial and rely entirely on public funds to operate". CIC is expected to be more on the profitable side. On p14 of CIC's 2021-22 Annual Report, they state (emphasis mine):

CIC is focused on providing a reasonable return to the Province. This priority must be balanced with its public policy initiatives, reinvestment in sustaining infrastructure, and providing high quality public services for the lowest possible cost.

Dividends from Crown Corporations go into the Province of Saskatchewan's General Revenue Fund (GRF). CIC targets a specific rate-of-return that balances costs, public access, and a target rate of return which is set to pay for public programs and reinvest in the Crown Corps for future growth and sustainability.

As a regulated utility, SaskEnergy is required to "not earn a profit or realize losses on the sale of gas to customers over the long term" (p32, SaskEnergy report). Furthermore, SaskEnergy can only adjust rates when approved by the Saskatchewan Rate Review Panel (SRRP). Rates have been frozen a while due to COVID.

When natural gas prices go up or down, SaskEnergy can't immediately pass those costs (or savings) on to customers. Differences are captured in what they call the Gas Cost Variance Account or GCVA (p32). They are charged (or refunded) to customers as part of future rate adjustments.

On March 31, 2021, the GCVA balance was $6 million owing from customers due to increasing commodity costs. One year later on March 31, 2022, now the GVCA balance was $15 million owing from customers, "a result of the AECO [Alberta Energy Company] daily index increasing commodity purchase costs" (p33) or in plainer English, gas being more expensive.

So, the rate increase is partially to cover this balance in the GVCA, but also to cover expected rising costs (keep reading).

Where does Saskatchewan get natural gas?

The short answer is: we used to make it here, but now we buy it from Alberta.

From 1988 through 2009, Saskatchewan was a net exporter of natural gas (see chart below). During this time of plenty, the gas demand curve increased quite gradually. In the mid-2000s, our production started to plummet and in 2009 - the inflection point of being a net exporter vs. a net importer - demand started to skyrocket. The difference between the blue line and the gray blob is the gas we import from Alberta. Today Alberta supplies about 75% of natural gas used in Saskatchewan.

Production of natural gas in Saskatchewan is "more than 70% associated" with oil production according to SaskEnergy's 2020-21 report (p27), meaning natural gas is a byproduct of oil refining. SaskEnergy adds, "local [SK] supply [is] highly dependent on the volatile global oil market." In comparison, Alberta has fields which produce natural gas directly (source 1, source 2).

Now, here's a scary idea. Saskatchewan and Alberta are reasonably (but not completely) decoupled and sheltered from global energy markets, but that may change in the very near future (emphasis mine):

Europe is facing an energy shortfall and increasing natural gas prices. Energy demands there may be met, in part, with increased shipments of liquified natural gas (LNG). Canada is still expected to enter the LNG export market when the LNG Canada export facility near Kitimat, British Columbia opens in several years. A smaller project near Squamish has also made progress with the final investment decision expected later in 2022.

The United States are ramping up LNG exports to Europe amid the EU's current energy crisis.

What this means for SK: the more coupled our energy supply is to the rest of the world, the more volatility Saskatchewan ratepayers will be exposed to, and the higher our energy bills will be.

A simple way to grasp this is to think about this question: Will Sask natural gas prices go up or down if Alberta gains the ability to sell LNG to thirsty international markets?

An Aside: Humans Are Bad At Predictions

I wanted to highlight the differences between SaskEnergy's future natural gas price predictions in their 2020-21 annual report...

The main takeaway of these two charts is that the gas market is volatile enough that a 5-year price forecast jumped by what looks like 70% in just a 12 month period. For more on predictions, read Nassim Taleb.

Currently, prices are at 10-year highs, according to this Government of Alberta site.

These are SaskEnergy-identifed risks (p41) from the 2021-22 report with colour commentary by me:

Get to the point already!

Referring back to my other energy posts: Saskatchewan has committed to increasing Variable Renewable Energy (VRE) sources for electricity and is phasing out coal power plants by 2030.

While some Manitoba import hydro capacity is planned, coal will largely be replaced with gas by 2030 (the Small Modular Reactor being commissioned "as early as" 2034) and VRE projects will be largely be backed up by more natural gas generation.

So the formula is:

Here's one final thought experiment: think about energy independence. From the late 80s to the late 2000s, Saskatchewan was energy independent. We mined our own coal, refined our own natural gas, built our own dams. Today, we are energy dependent: 75% of the natural gas burned in the province is from Alberta (which generates 40%+ of our electricity), and a growing chunk of hydroelectricity is imported from Manitoba. Which is the more precarious, less stable, more expensive situation?

Contract every possible megawatt of hydro power from Manitoba for as long as feasible, for cost, carbon, and dispatchability. Push the SMR Roadmap forward. Increase diversity and independence in our electrical energy supply: build out a fleet of SMRs where 2 years' worth of super energy-dense fuel can be bought and stockpiled on site (compare to gas which is delivered just-in-time from a pipe at today's market prices).

As always: open to constructive feedback and corrections!

Labels: energy
Email ThisBlogThis!Share to TwitterShare to FacebookShare to Pinterest