I was in Saskatoon this weekend, and on Sunday night Robyn and I made salmon burgers!

They turned out AWESOME. And they were wickedly easy to make. We chopped about 650g of boneless, skinless salmon in a food processor, then mixed in (by hand) 1/4 cup chopped green onions, about 1/4 cup feta cheese (more would have been good), an egg, a cup of bread crumbs, a shot of lemon juice, and as much fresh dill as we could muster. Which was one package from the grocery store. 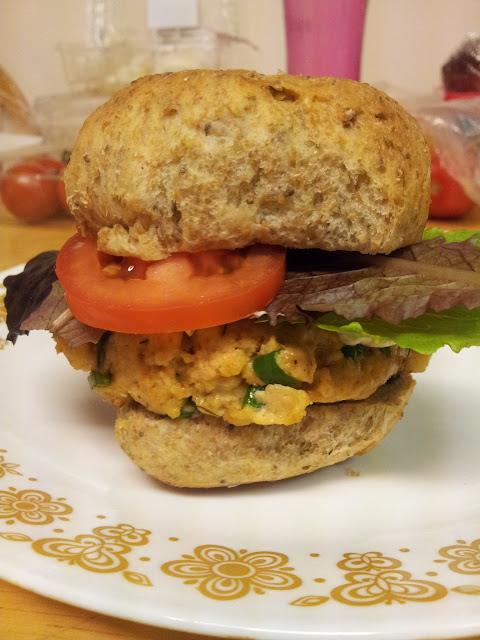 We formed patties and fried them in 1-2tbsp of olive oil in a pan for about 4 minutes per side. Also, I made "homemade tartar sauce****" which has four emphasis stars because really I just cut up pickles into tiny bits and mixed them into mayonnaise.

We found the recipe in Looneyspoons and it would have been way better if we had all of the ingredients (lemon zest, for one) BUT they were still amazing. Robyn made homemade buns (pictured) the day before so they were extra-awesome!

A very simple recipe: will make again!
Posted by Brahm at 4:19 PM