On Friday I took off for Saskatoon for the weekend. Air Canada managed to delay my flight out of Montreal, which caused my connecting flight in Toronto to leave without me - hooray!

Everything flying to Saskatoon was full, but luckily I managed to hop on a plane to Regina mere minutes before it took off - after sprinting to the gate an amazing agent got me on the flight. Robyn, being awesome, drove to Regina and picked me up.

On Saturday Robyn and I visited the Forestry Farm Park & Zoo, which is awesome in winter! It's open to the public - 100% free of charge - in the winter months. It's only slightly creepy walking around in an empty zoo (we were the only people at noon on a Saturday) but the awesomeness of the animals makes up for it. Since it's winter, they're moving around to stay warm, and because the zoo is otherwise empty, animals are curious about anyone who is there.

The most amazing was how interested the lions were in us: 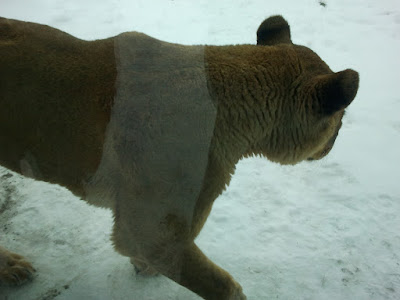 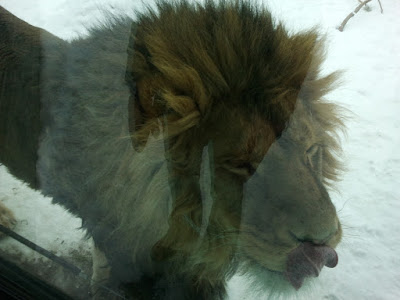 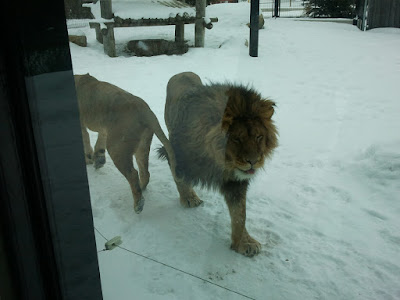 As long as we were standing there, the male paced back and forth in front of the viewing glass, growling (purring?). The female joined him for a while, but we were too boring to keep her interested.

And yes, we were slightly surprised to see lions hanging out in -25*C weather!

After a weekend packed with family and friends and familiar routines, it's a bit strange to return to Montreal. But this should be a fun week, tomorrow I'm hosting my cousin and her family for a bunch of delicious pizzas, and on Thursday I have an "interview" to determine my competency in French which will determine my placement in a beginner's class. Fun!
Posted by Brahm at 5:22 PM