My roommate in Saskatoon sent me a link to this recipe and I made it last night:

Sautee onion in oil unbtil slightly brown. Add chicken and garlic and cook until almost done. Add soy sauce and lemon juice and chili and sugar. Cook for a little bit. Add PB and water and stir until thickened. Fold in spinach leaves until whilted. serve over rice or by itself.

SIMPLY AMAZING. I added a bit of cayenne pepper for extra kick. The recipe is quite similar to an already-awesome dish my mom makes (Mongolian Beef) and I can't say that one is better than the other, but they are both knock-out dishes. Here's the spicy peanut chicken: 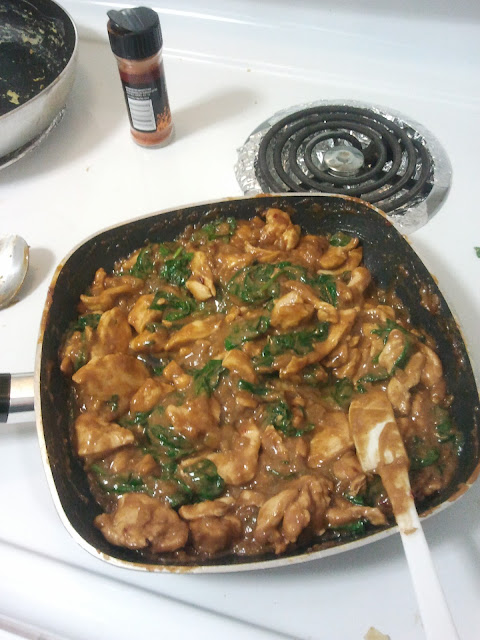 I made a pizza for supper tonight - pesto, sun-dried tomatoes, mushrooms, and feta cheese. Mmmmm: 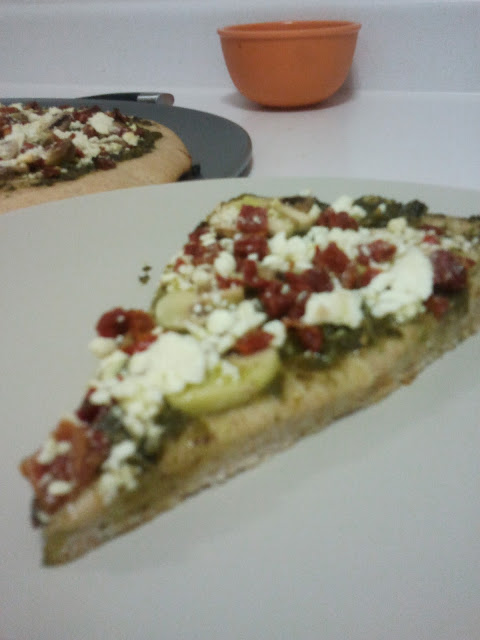 Confession, the pizza crust came in packs of two, so I really made two pizzas which I will be eating for the next several days.

I am looking forward to making the trip back to Saskatoon this weekend! I bought myself a small carry-on bag for $50, I figure it's a good investment considering I will be making lots of these weekend trips. On my first trip home I thought I was smart by packing everything in one of those reusable grocery bags, but I just felt like a hobo and it was annoying that it didn't close (and spilled underwear and socks everywhere when it tips over!).

Less than four weeks until the Rush concert and less than eight weeks until Iceland!
Posted by Brahm at 6:24 PM