I'd eaten it previously, but I never really realized how amazing pork tenderloin was until about a year or so ago - Robyn turned me on to it. It's cheap, simple, versatile, and extremely delicious: tender (true to its name), juicy and near-impossible to screw up.

At the Metro (grocery store) below my apartment I can get a full pork tenderloin for under $5, easily enough for two meals. Do ANYTHING to it, throw it in the oven for ~35 minutes at 425*F, and BAM, amazing supper.

On Tuesday I was feeling a combination of lazy and hungry - a dangerous combination that could normally lead to Subway or Pad Thai. But instead of fast food I grabbed a pork tenderloin for $4.80 and some asparagus. I Googled "easy pork tenderloin" and found this dead-easy recipe. Breadcrumbs, olive oil, pork, and you're done! 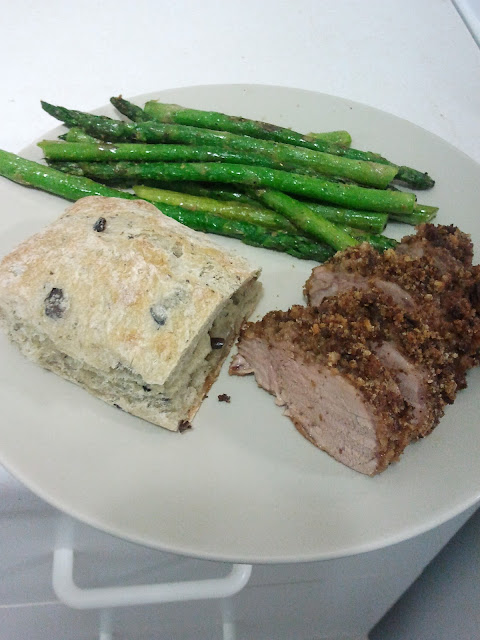 I tossed the asparagus in Mrs Dash and olive oil and threw it on the George Foreman grill for 8 minutes. It could have used 2 more minutes, but was still good. I had some olive ciabatta buns that I garlic-buttered and tossed in the oven for the last 10 minutes.

Total cost, about $10 for two meals' worth, and prep and cooking time was about 45 minutes total. Yumm.
Posted by Brahm at 3:28 PM