I love data (see: here) and when the government starts churning out really cool datasets I think that is even cooler.

Yesterday Jim Flaherty released the Canadian budget in the House of Commons and the opposition parties rejected it. The Liberals will be tabling a non-confidence motion on Friday and basically what this means is that we're probably having an election in May. This may be underwhelming for most people but it's exciting for people who love The Current on CBC Radio (like me).

Inspired by all of this election talk, I poked around and found some interesting government and non-government pages:

OpenParliament is the product of one guy being frustrated at the fact that the Government of Canada doesn't publish House of Commons data in a format easily readable by humans. So this one guy programmed a site that parses all of that raw data and makes it easily searchable and indexable. Kudos to that guy! They have statistics and history for every bill, motion, MP, etc: 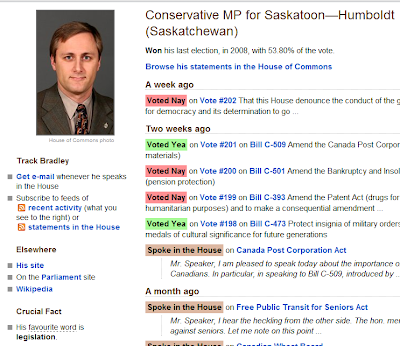 Brad's favourite word is "legislation" - boring! It should be "zounds!" or "ass-hattedly"
A great site that is worth exploring! I have subscribed to RSS feeds of my MP's recent activities so I can send him angry emails when he does something dumb, like vote against a bill that would prevent children in developing countries from dying.

I think people could learn a lot about their MPs simply by looking them up on OpenParliament, and checking to see if their MP's votes line up with their personal beliefs. I know I did.

I also like love MAPS and the folks at Elections Canada have some pretty maps of electoral districts on their website (click "Maps Corner"). Most are available in PDF format so you can zoom in and check out what's relevant to you. Here's conservative Saskatchewan in blue: 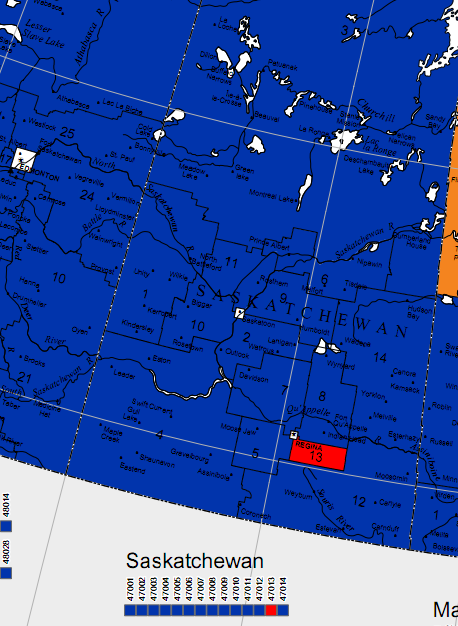 That one district in Regina just can't get enough of Liberal MP Ralph Goodale.
3. Data.gc.ca (http://www.data.gc.ca/)

No pretty pictures here. The Government of Canada is slowly warming up to the idea of sharing data so that people can play with it (for instance, writing useful apps), and Canada's effort feels quite new.

Many municipal and federal governments already do this, like New York City, San Francisco, Vancouver, the United States, the United Kingdom, etc. Unfortunately Canada's page is boring and ugly - like every other Government of Canada page - and it really sucks the inspiration out of developers looking to make cool data-based apps.

I just created a "politics" tag for this blog, I hope that's not a bad move. With a looming election I think I am interested in exploring some issues based on my interests - communication, technology, privacy, etc. We'll see what happens!
Posted by Brahm at 4:48 PM