First thing this morning I had an appointment with LaCite apartments to check out some of their apartment offerings. The complex has some very cool perks:


Having read their entire website in advance, I arrived with some smart questions prepared and my heart set on a 10th floor apartment with a 240 square foot terrace for $920/mo. Seemed too good to be true! I've been fantasizing the past few days about sitting on a spacious terrace in the summer with a beer in one hand and a book in the other.
I sat down with the agent and she quickly crushed my dreams: there was one apartment with a terrace available, but it had more than one bedroom, and it would cost $1,650 a month - well out of my price range. Oh wait, here's a one-bedroom with a terrace, but it's currently a storage space. Should we still look at it? Sure, I said.
We set off to look at the first of four units on the tour. The first was the best - it was a 7th-floor unit with newly-renovated hardwood floors (in a building that mostly has drab grey carpet) and a view of Mont Royal: 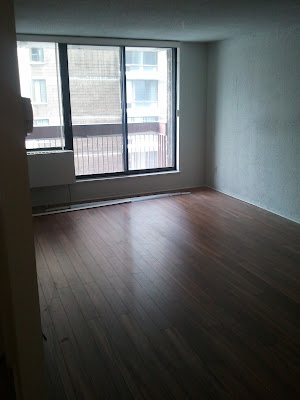 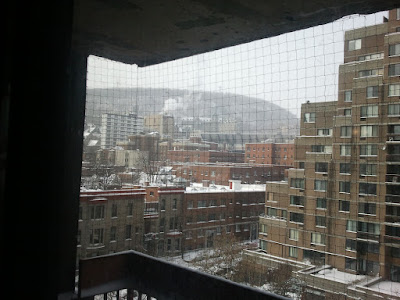 This could look awesome in the summer.
The bathroom and balcony were tiny (goodbye, sweet terrace dream) and it had a kitchen that would be called small by most people's standards. However, my apartment in Saskatoon has a micro-kitchen and these seemed comparable (if not bigger), so no complaints there. The living room and bedroom seemed like more than enough space for one person. The price was higher than the $920 I'd anticipated, but it included heat, water, and electricity.
I said "looks good!" and we moved on to the next two units. This is where things started to go downhill. I was shown two units back-to-back that were a combination of storage spaces and in-progress renovation projects. Screws, drywall, and garbage on the rugs, a big burn mark on the counter from who knows what, another big burn mark on the ceiling that looked like a light exploded. One unit had a bedroom that was half-full of mattresses (it just occurred to me that it was likely the mattress that smashed the light, creating the burn mark). One unit even had a terrace (yay!) but it was on the second floor and the view was boring (boo!). No matter how good units might have been it was just too difficult to see past all of the crap. In a moment of clarity I finally understood all of the TLC/HGN shows about "staging" homes. I could tell the agent was embarrassed to be showing me these units in that condition and I was embarrassed to be in them.
In a redeeming move we went to check out a 17th-floor unit as our last stop. It was similar to the first, but carpet instead of hardwood, and no balcony. It had a really cool view of downtown, but the first unit was a little bigger and better.
Even though my heart was crushed by the lack of a terrace, I did some rational thinking and decided LaCite would still be a good place to live and I "reserved" the 7th floor hardwood unit until Friday - at which point I can take it or leave it. The convenience of a shopping centre on the lower levels is amazing. Even though I was (and still am) feeling a bit bummed out about not getting a dream apartment, the shopping complex downstairs was a huge added bonus, and the location is close to downtown which is where I want to be. I have to remember that this is just a one-year stint - I don't need to live in my dream apartment.
--
The rest of the day has been boring. I wasn't really in an adventurous mood. I was feeling a bit melancholic, partially because of the terrace let-down, and partially because checking out apartments suddenly made this year-long relocation feel very real. I did laundry in the hotel and bought groceries. I downloaded some games for my Android phone and played them (Jet Car Stunts!). I made a salad and ate it out of my ice bucket because all the plates and bowls in this suite are tiny.
At one point in the afternoon a chain of about 70-100 cars with Quebec flags drove up Rue Sherbrooke, all honking, with a police escort. I remain puzzled about why this happened. 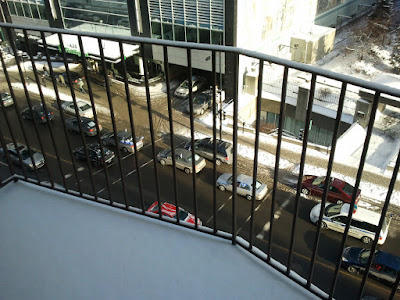 I'm hoping that next week I can get my terms & conditions from my employer on paper and finalize things, once and for all! I don't like being in an agreement-less limbo.
Posted by Brahm at 6:14 PM