Back in Saskatoon - for a week.

On Friday morning at 9am I signed the lease for my apartment in Montreal starting February 1st, 2011. That was an exciting and nervous moment. At 11am I was off to the airport to come back to Saskatoon for a week.

This week is going to be nuts. I have to pack and ship stuff to Montreal, book my flight out there, clean my apartment, run a million errands, go to work every day from Monday to Friday, and spend a ton of time with friends and family. I think I will fly out on Monday, January 31st.

I thought of a clever idea for packing - but it turns out I am not very original. I bought four large Rubbermaid containers from Wal-Mart and drilled six pairs of holes on each, so I can zip-tie them shut for shipping. I don't have that much stuff to ship out there (my agreement says I need to keep my place in Saskatoon, so I'm not shipping furniture) so I think I can get away with four boxes: 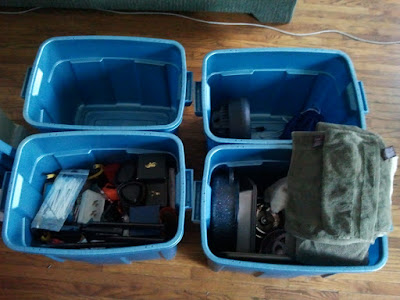 You can kind of see the holes. But I'm not clever; apparently many mobile science camp crews use this trick, including clever labelling to avoid mixing up lids and containers.
I'm most worried about shipping my other love; my Gibson SG. All of my clothes and kitchenware can be destroyed for all I care, but I would rather see this guitar arrive safely than receive ten times its insured value. I found a good guide for shipping guitars that I'll follow.

Yesterday Robyn helped me scour the IKEA website to furnish the new apartment. Though being away from everyone I know in Saskatoon for a year will be tough, I'm looking forward to living somewhere nice. My current apartment is has a little too much "character" - it's flood prone, for instance - and the new apartment is going to be neat, clean, minimalist, and "grown-up".

This week will be a quiet one for blog posts but expect pictures of the apartment next week!
Posted by Brahm at 3:15 PM

Labels: montreal
Email ThisBlogThis!Share to TwitterShare to FacebookShare to Pinterest