Virtual Private Networks and Why You Might Want One

On Tuesday I signed up for a paid Virtual Private Network (VPN) service. Why? In three words: privacy, security, and flexibility.

The internet is not a series of tubes as you may have been led to believe. It is a network of computers that all have to talk to each other. Sometimes it is not clear who owns what computer, if they are using it for good or for evil, or if it can access your private data.

Here's a simplification of how the internet works. Let's say you want to visit Wikipedia, so you type http://en.wikipedia.org into your browser. Your network traffic (requests you send to the internet, and the data that comes back) first passes through your local network. This is literally the network you're connected to - a router at home, a wifi hotspot at Starbucks, or maybe a computer lab on campus.

Next, the traffic passes through your Internet Service Provider's servers: SaskTel, Shaw, Rogers, etc. Finally, your traffic passes through more servers until it gets to Wikipedia's servers. Wikipedia's servers then sends information back to you the same way you received it. Anyone who is determined enough can snoop at what you're looking at - maybe someone sitting at the other side of Starbucks, or maybe someone who works at Shaw, or maybe some tricky hacker.

A VPN creates a highly encrypted and secure connection (a "tunnel") between your computer and a VPN server. If you type http://en.wikipedia.org into your browser when you're using a VPN, the VPN server "asks" Wikipedia for the info you wanted, then sends it on to you. Wikipedia won't know anything about you (unless you're logged into a user account) and it cannot tell you're using a VPN, and no-one between the VPN server and your computer can see what's going on, either.

Here's a diagram I made (all by myself!) that explains how VPN works. Click to enlarge: 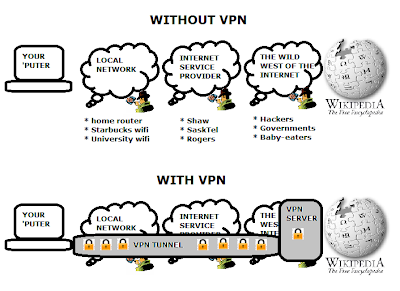 It is virtually impossible for anyone between your computer and the VPN server to figure out what you're doing on the internet - whether it's paying your bills, submitting your tax return, typing a note to your sweetie, learning about dogs and cats, or watching a saucytime grownup film.

Privacy and security are good enough reasons to get a VPN - I'm confident that data I'm transmitting on my computer can't be intercepted by local hackers, my Internet Service Provider, the government, or whoever might be "listening" to internet traffic. But the coolest feature - at least for Canadians - is flexibility.

Lots of websites know roughly where you're browsing from, based on your IP addresses. It's why when you type "www.google.com" you're taken to www.google.ca. It's why Canadians can't watch lots of streaming videos, due to dumb licensing rules.

I selected WiTopia.net as my VPN provider. They are very well-reviewed, and in my limited experience - great. They responded to a bunch of pre-purchase questions quickly and with lots of details. There are some free VPN providers out there, but it's easy enough for a 16-year-old hacker to set up a VPN server and make it look legit - so I'm paying for peace of mind. With WiTopia, you can pay by the day, month, or year, and there are lots of money-back guarantees. So check them out if you want to protect your online info and free yourself from the shackles of location-based internet!

Blog post: done. Now I'm off to watch full episodes of the Colbert Report!
Posted by Brahm at 4:54 PM