I bought a new guitar today with some money I got from my parents for Christmas!!!!

It is a Jackson Rhoads RR3, made in Japan, with a Floyd Rose licensed tremelo and Seymour Duncan humbuckers (pickups). The guitar was designed by the late Randy Rhoads, who played with Quiet Riot in the late 70s and Ozzy Osbourne in the early 80s, before a dying in a plane crash in 1982.

Although Randy Rhoads designed the Jackson Rhoads guitar, he (tragically) never played it. He played the prototype and sent feedback to the guitar makers, but died before the revised prototypes were completed. Although Rhoads was only 25 when he died, he had a massive impact on the metal scene with some original guitar work in classic songs like Crazy Train, Diary of a Madman and Mr. Crowley.

I bought the guitar from Italmelodie in Montreal where a guy named Dino was super helpful, letting me play on a crappy practice amp (to simulate the crappy amp I have here in Montreal) and a huge Marshall stack in a soundproof room. He was great - he left me alone to play for 40 minutes or so, stopping by every once in a while to ask how I was doing or tell me he liked a song I was playing (I was playing a lot of Randy Rhoads stuff, and he's a huge fan). A+++ would shop again! 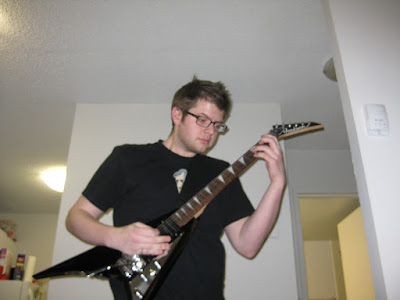 It is hard to take a picture of yourself holding a guitar and also looking cool.

Here's a little video I recorded this evening. I'm playing part of a song called Paraphrase by Swedish guitar sensation Yngwie Malmsteen. I couldn't get an cut with no mistakes so I said "eff it" and uploaded this version.

I've only put a few hours of play into this guitar but I already love it. The action is super low and the notes just jump off the fretboard. My Gibson SG has no tremelo/whammy bar so it will take some time to get used to the whammy on the RR3. The only downside: it's not easy to play sitting down. But that's okay, sitting is not very metal. I might upload a few more videos of me playing guitar in the future, we'll see!