I've decided that once Robyn and I buy a house - sometime next spring - I will need to dedicate a closet somewhere to housing a (more) powerful media server. I am getting too nerd-excited about this already.

I've got my eye on this rack-mountable enclosure that can hold 11 hard drives: 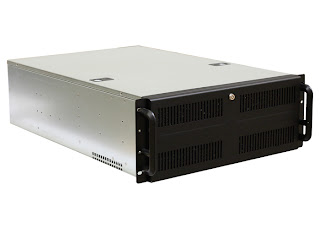 And some type of real - but tiny - server rack from these guys like this:

In terms of components, I'm thinking about something along these lines:


I think I can do everything but the server rack for under $700. In my opinion - totally worth it!

Also on my wish-list for the magical server closet (extra costs):


And most importantly: does anyone have any good ideas for a server name? And is it crazy that I put a lot of thought into naming computers? My current server is READY2SERVE, my laptops BRAHMTOP (died last summer) and DETHPAD (current, named for Dethklok), and my desktops have been PERCEPTION, DECEPTION, INDUCTION, and PERSUASION. I feel like it's bad form to use a name twice.
Posted by Brahm at 8:35 PM