Problem: I am a heavy sleeper. I am usually great at waking up on time for ultra-early morning commitments in the summer because of all the natural light, but when it's dark in the winter, I have a lot of trouble throwing myself out of bed. 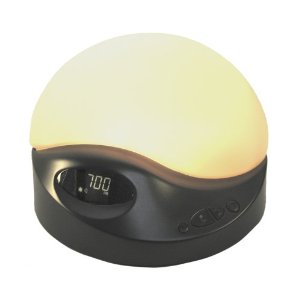 (click to go to Amazon)
These tacky wake-up light alarm clocks aren't any more complex or expensive (materials-wise) than your average $20 alarm clock, but because they're often marketed as "beauty products" or "therapeutic products" (for such magical side effects as "improved mood" and "more energy") the cheap ones are often $100 or more. Personally I don't buy those sketchy claims, I just want to wake up in some light!
Solution: Programmable Timer/Light Switch, $35 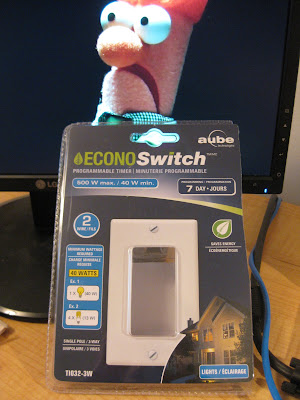 Packaging pictured with my awesome desktop wallpaper.
I grabbed the AUBE TI032-3W from Rona at Preston Crossing for $35 after finding good reviews online. It features seven memory slots where you can easily program your light's behaviour. I've used five memory slots by setting it to turn on at 6:15am and turn off at 7:00am each weekday. 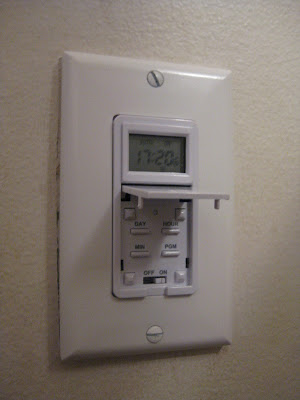 Here's the control panel. Future bedroom!!
When that little switch is set to "on" (it really means "auto") the switch follows the programs you specify. However, you can also override the programs at any time by pushing the outer faceplate - it's one big button. So on a Monday when my light turns on at 6:15am with my alarm, I can hop out of bed and turn it off at 6:20am - it doesn't have to stay on until 7am, as I've programmed it to do. But if I forget to turn off my light, it will turn off at 7am. Similarly, I can turn on my light at any time during a period where it's programmed to stay off. 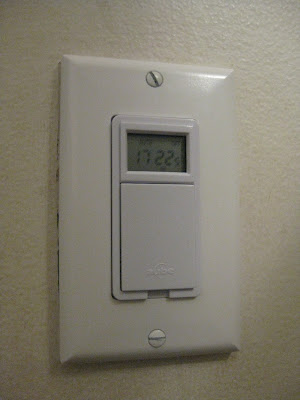 The panel under the LCD closes to become one big on/off button.
This $35 device took me under 15 minutes to install. Basically I just took out my old manual light switch and connected this one. Even though the installation was easy, if you're unfamiliar with electrical wiring and HOW TO DO IT SAFELY I would highly recommend finding someone with experience - preferably an electrician - to help you out.
5/5 stars so far!! As the days keep getting longer, I am looking forward to not waking up in pitch blackness.
Posted by Brahm at 7:48 PM 1 comments

Labels: fun
Email ThisBlogThis!Share to TwitterShare to FacebookShare to Pinterest

My friends.... we have invented something amazing. Picture Metallica's crunchy riffs - yes, even if you're a Metallica hater, you know there is that one song you still like - and now picture them slowed down and pitch reduced by 25%.

I was at a buddy's house, playing some video games and having some beers. We through Metallica's Master of Puppets 45rpm LP on his record player, without realizing the turntable was set to 33rpm. Dismay and annoyance at our so-called "error" immediately turned to PURE JOY as we realized just what we had discovered*.

*Technically, Slowtallica has already been discovered. But we'd still like credit for an independent discovery.

I can barely express how awesome Slowtallica is without extremely profane and emphatic language, but I will do my best to keep this clean.

Slowtallica takes Metallica's thrash hits and turns them into crunchy, deliberate pieces of low, heavy metal. In some respects, Slowtallica sounds like the slower, incredibly low and crunchy viking metal songs of Amon Amarth. And like Amon Amarth, James Hetfield's voice is transformed from his normal pseudo-raspy mid-range "Yeaaahhhh!"s and "OHhhhhhh!"s to awesome, demonic, hellspawn vocals - the way heavy metal was meant to be delivered.

Don't believe me? I took the liberty of including a few samples in the 1-minute-30-second video below:

I kept the sound clips to 30 seconds to minimize the odds of the video getting flagged for copyrighted content. We start off with a Metallica song that everyone should know: Master of Puppets. We then slow it down 25% and therefore make it 25% better. We move on to a sampling of Leper Messiah, which sounds absolutely, insanely deadly with your speakers or headphones maximized, and finish it off with an instrumental sampling from Orion.

If you want a Slowtallica album all for yourself, I can't give it to you! But, if you have some legally-acquired mp3s (or any mp3s, really), you can download Audacity then follow this tutorial to create some Slowtallica of your very own. Tip: -25.9% is the perfect slowing factor.

Best Deal I've Encountered in a While!

I told myself that when I graduated, I'd buy every (available) season of Law & Order on DVD. This includes the original series, not SVU or Criminal Intent. About 9 seasons are available now (though not Seasons 1-9 - it's 1-7 and a few Emmy-winning seasons).

So I had the NBC/Universal Store bookmarked for ages. Yesterday I clicked it, and saw that all Law & Order DVD box sets were marked down to $20 from $60!

On top of that, I Googled "NBC coupon" and managed to get another 25% off my entire purchase! By pure luck, that magnificent coupon expired yesterday - the day of my purchase! 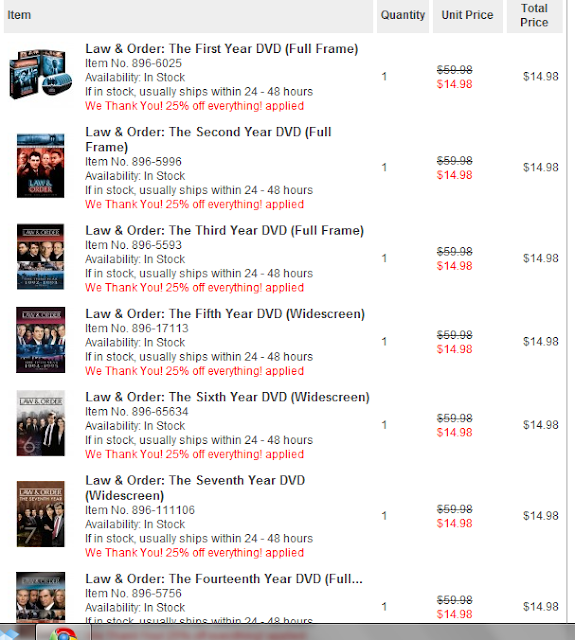 Oh yeah! Seven seasons of Law & Order plus a few other small items, plus shipping to Canada cost me less than $150! My life is awesome.
Posted by Brahm at 8:33 PM 0 comments