Back in September I posted an admission: I love television. I love it among other things, of course, but I think one can love TV without being an antisocial cretin. There are just too many high-quality programs these days.

Here's a revision of my previous list - some shows have fallen off my radar completely (The Office, Dexter), and some other new shows have caught me completely off-guard as being awesome (Sherlock, Todd & The Book of Pure Evil).

Shows I Want To Start - when there's time
- Alphas
- Firefly (I've seen it before, but need to re-watch to fully appreciate)
- HBO's Veep
- HBO's Girls
- The Killing (Season 2 - I really enjoyed Season 1)
- The Wire

My All-Time Favourite Shows - now off the air
- Battlestar Galactica (SO GOOD - I recently re-watched the whole series again)
- The Sopranos
- Arrested Development
- Law & Order
- Law & Order: Trial By Jury (a one-season wonder that was better than most regular L&O episodes)

If you love TV and there's an awesome show you think lines up with my tastes, let me know. I'd love to hear about it!

Behind my crappy apartment there is a sound wall. Behind the sound wall there is Idylwyld Drive. Apparently sound walls are not very good at deflecting cars. 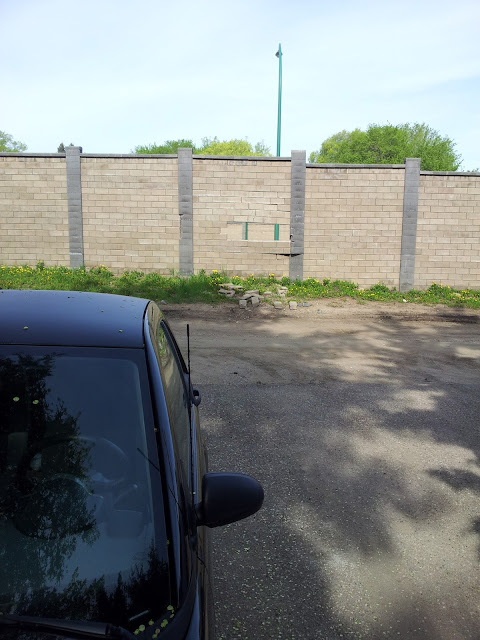 That's what I found last Saturday when I walked out of my house. I sleep with my window open - I am surprised I didn't hear this. Nice big set of skid marks on Idylwyld to match, and the wall looks a lot worse on the other side.
Posted by Brahm at 2:17 PM 2 comments