Has anyone else noticed that Tim Hortons food is some of the most bland, boring, tasteless food available for purchase? 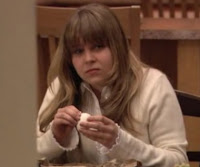 I was eating a Tim Hortons sandwich in an airport when I was flying between Montreal and Saskatoon a while ago. I was struck by how completely boring the sandwich was - crisp but flavourless lettuce, a tomato that seemed like it had once been frozen, and deli meat that could have been called ham, turkey, or beef and I wouldn't have known the difference.

It had mustard, but it was more of a paste-like yellow garnish than something that added any flavour sensations.

Even the donuts seem more bland than they used to. Is it my imagination? Is it real; a side effect of the massive reheaeted-from-frozen food supply chain that Tim Hortons has apparently become?

McDonalds, Burger King, and the rest of the fast food industry knows that sugar, fat, and salt taste good. If I can't detect any flavour in a Tim Hortons sandwich - if the act of eating Tim Hortons is equivalent to a chore where you have to move your mouth to force a bland mash of bread and assorted toppings into your body - does that mean it's healthy?