How Most Canadian Cell Phone Contracts Work, and How To Get The Best Phones for $0 (Over Time)

Edit September 2016: This post remains my #1 all-time trafficked post, but much of the information is outdated or obsolete. Please take the advice with a grain of salt. My philosophy on phones has changed - I buy the premium Nexus phones straight from Google, and put them on a monthy Virgin Mobile plan ($53/mo after taxes for 5GB of data and unlimited calls/texts).

Since I started becoming interested in both consumer rights and mobile technology, I've encountered a lot of confusion at the intersection of those two ideas: just what rights do consumers have with their cell phones; what are they allowed to do? Here's a BIG collection of those answers. I expect to be directing quite a few people towards this post!

Scroll down the blog post for answers to the following:

This is not a dumb question, because to most everyday users it is not clear. The answer is yes. You own the physical piece of hardware (the cell phone) that you bought and paid for from the carrier. That iPhone belongs to you, and only you.

A $50/month, three-year contract equals $1,800 of your money paid to a cellular carrier over that time period. Given that guaranteed revenue stream, most carriers in Canada and the United States will subsidize the cost of the cell phone itself. So even if you've received a $0 cell phone with your new cell phone contract, that piece of hardware belongs to you. You're free to modify it, scratch it, put a sticker on it, or sell it.

2. What if I break my cell phone? What if I hate using it?

If you drop your cell phone and it breaks, or if you truly dislike using it, you are welcome to replace it with a new cell phone at any time, whether you have a contract or not. You do not have to wait for your contract to expire to change phones. In fact, it pains me when people tell me they're "waiting out" their contracts while paying $40-80 dollars a month to use hardware they hate!

Since the cell phone belongs to you (not the carrier), the carrier doesn't really care what you do with your physical phone as long as you maintain your contractual agreement. If your phone needs replacing, you have a few options:

1) Buy a new phone from the carrier. You're welcome to walk into a SaskTel store, pick out a shiny new iPhone, BlackBerry, or Android and say "I want this phone on my current contract". The downside: if you're in the middle of your contract, you will be ineligible for a subsidized cell phone. That new iPhone may cost $600 - which represents the true, unsubsidized cost of the phone.

2) Buy a new or used phone, anywhere else, so long as it's compatible with their network (see next section for more information).

Something thing to be aware of: most carriers charge a "new device activation fee" for bringing a different phone onto their network. This is a one-time fee; at SaskTel it is $25.

3. I'm on a 3-year contract and I lost my phone. My carrier wants $200 to cover the remaining months. Seems like highway robbery to me. What do you think? (added this question Nov 25/2012)

Sadly, there is no such thing as a "free" phone.

As an example: Telus (or Rogers, or SaskTel, or whoever) will give you a $300 phone for $0 if you agree to a 3-year contract. They know that they can lose a bit of money on the phone, but make it (and much more) over the 3 year contract.

A $75/mo plan over 36 months is $2700 in Telus' pocket, but some of that monthly fee pays back the $300 they LOANED you when they "gave" you that phone for "free" - I use quotes not to be facetious, but to emphasize that the phone didn't REALLY cost nothing and it wasn't REALLY free.

If you lose your phone or want to cancel your contract, suddenly Telus can't make 3 years' worth of money from you, AND you (or your daughter) effectively lost $300 that Telus loaned you.

4. Other than a carrier's store/website, where can you buy a phone?

This one's easy: virtually anywhere. You can look on eBay, Kijiji, or see if your nerdy friend has an extra phone lying around.

You need to be sure that your new phone will be compatible with your carrier's network. If you order a phone directly from Japan, chances are it won't work in Canada. But if you buy a used phone from a SaskTel customer, you know that phone will work on SaskTel's network.

Often times it may not be clear if a phone will work on SaskTel's (or your carrier's) network. I recommend collecting as much info on the phone as you can (brand name, model number, serial number, etc) and send that information to your carrier. In the past, SaskTel has been very helpful answering compatability questions that I've had.

A SIM card is a tiny removable chip in your phone. If you're on Rogers, or if you're on SaskTel or Telus' new 4G networks, you have one. It's wafer-thin, about an inch long and looks like this: 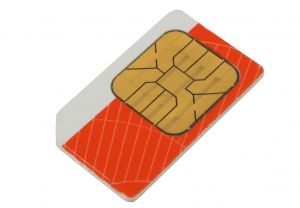 SIM stands for "subscriber identity module" which gives you a hint about what it does: it identifies you to cell phone towers, which then know what services you should be billed for (voice, text, data, etc).

In "the old days", a carrier like SaskTel would manually program your cell phone number into the phone when you purchased it. On the newer networks with newer phones, a SIM card eliminates the need for that manual entry: any phone you insert your SIM card into will be the one that rings when someone calls your cell phone number.

If the following conditions are true...

...ANY phone that you put your SIM card into will just start working, with no need to talk to your carrier (or be charged a $25 device activation fee). Again, your carrier only cares that you pay for your contract, they don't care what phone you use. Knowing this, it's possible to own multiple cell phones, and put your SIM card in the one you want to use at the start of the day.

In short, a SIM card allows you to access the services your carrier provides to you, through any cellular device of your choice.

6. The $0 Phone is (Almost Always) a Bad Investment

Especially to smartphone buyers: if you're paying close to $3,000 for your contract, why accept a mediocre device? $0 phones are often older, out-of-date phones that lack the cool features of the newest phones. Their cameras are bad, their user interfaces are frustrating, and certain apps may not work - or worse, they may not support apps at all! Imagine, a phone without Angry Birds.

If you or someone you know is not very tech-y but you still want a smartphone, buy an iPhone. I'm not a huge fan of them for a bunch of nerdy, obscure reasons, but they're extremely high-quality, capable and most importantly, easy-to-use devices.

On the other hand, if you accept a years-old $0 phone with a new contract (old BlackBerrys are often freebies), you're going to be using a slow device with a bad camera, bad apps, bad user interface, and bad screen resolution for the next three years! If you look at your phone more than five times a day, you owe it to yourself to use a functional, non-frustrating, usable piece of technology.

7. A Personal Example: How to Get Top-of-the-Line Phones for $0 (over time)

Here's my system to get the best phones and pay (essentially) nothing. In fall 2011, I was eligible for a subsidized hardware upgrade with SaskTel. A hardware upgrade is essentially a reward for making it through 24 months of a 3-year contract; carriers let you buy a new phone at the three-year subsidized price IF and ONLY IF you renew your contract with them for an extra two years.

I bought a Samsung Galaxy S II at the subsidized price of $160 plus tax. I removed the SIM card from my old phone - a Samsung Vibrant - and put it in my new phone. I turned it on and it worked. Easy!

Later that week, I unlocked my old phone so it would work on any carrier's network (which required some Googling and some hacking). This is not required, but it increases the number of potential buyers since someone could take it to Telus and use it there. Then I listed my old phone for sale on Kijiji. Within a few days, I sold it to a guy for $250. Hello, profit!

In fall 2013, when I am eligible for another hardware upgrade, I will once again buy the latest-and-greatest phone for the subsidized price of about $200. I will also sell my Samsung Galaxy S II on Kijiji for about $200-300. This is possible because I purchased my current phone at its subsidized price, not its true retail value of $600-700. Because these are higher-end phones, they retain value much better than the $0 phones.

The market for used high-quality smartphones is strong, so by purchasing subsidized top-of-the-line smartphones and selling them two years later at their used, but unsubsidized value, I'm essentially paying $0 for the best phones available. This is infinitely better than the people who get stuck in the free/$0 cell phone cycle - their hardware costs over time are the same as mine, but I get to use the better phones :-)

How do you figure out what price to sell your old phone for? Just search Kijiji and see what other people are charging.

If you decide to switch from SaskTel to Rogers, or Telus to Bell, or MTS to TBayMobile, as a Canadian you have the right (by law) to keep your phone number. This is called Wireless Number Portability, and you can find more info on it here: http://www.wirelessnumberportability.ca/english/index.html

The main restriction is that you must be within the same metropolitan area. If you're moving cross-country, you may not be eligible.

The most important thing to remember is not to cancel your old account before signing up for the new account - your new carrier (or existing carrier, if you're going from landline to cell but staying with the same company) will initiate the process of porting your number for you. This number portability process should be free, even if there are other fees on your account (like SaskTel's $25 new device activation fee). And it should always be possible to port numbers - within the restrictions outlined on the linked site - so don't let an uninformed service representative tell you it's impossible.

If you're going to be in another province for a few weeks or months (but not years):

1) Go pre-paid, but the provider doesn't really matter. For a Rogers, SaskTel, Bell, Telus, Fido, etc pre-paid phone plus a month of phone and data is probably going to run you $50-100 for a cheap phone, $20 for a month of calling, and $20 to add on some data. Do some research to see who has better coverage in that province if you will be travelling around.

2) Roam on your existing provider's number. Depending on your use, if you're in another province for a few weeks or months the roaming charges may be less than the $100-200 you might otherwise spend on a pre-paid phone plus minutes and data.

That's all I can think of! Please leave a comment or shoot me an email if you have a question - I do enjoy updating this post and making it a useful resource. Please note that I don't know the "best" details of every plan, provider, etc, so I often can't recommend a particular plan, phone, or provider. Unless you're in Saskatchewan, go SaskTel :-)
Posted by Brahm at 1:00 PM