Today there was a lot of snow in Montreal! 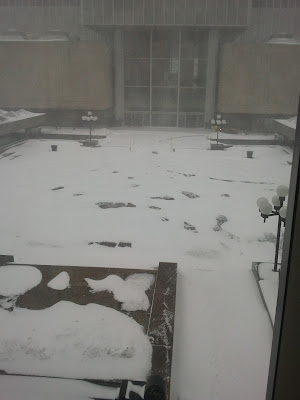 After work I hopped in a cab and went to IKEA. The drive out there was scary - it was the middle of a snowstorm and the driver was texting and watching live TV on his cellphone the whole way. I guess that isn't illegal in Quebec like it is in Saskatchewan.

I had supper at IKEA: 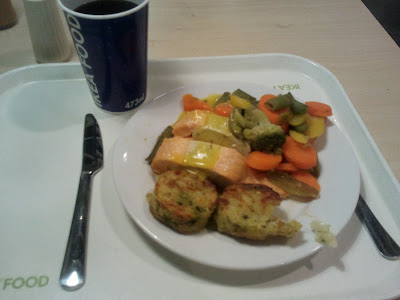 Salmon, vegetables, and vegetable cakes made of potatoes and broccoli!
IKEA rules. I bought... pretty much one of everything for furniture. I didn't get much kitchen stuff because I am shipping most of that from Saskatoon. I had three massive carts by the end. Manoeuvring is hard when you have a queen-size mattress right in front of you and two other carts to lug around.

I don't want to publicize how much I spent, but I was pretty impressed at how (relatively) cheap it is to furnish a full apartment from IKEA. The only thing missing was chairs for my table - they were sold out of every wooden chair under $50! Sorry, I am not spending $80 or more per chair when I want to buy four, nor am I buying a bunch of plastic chairs that have a sticker that says "MAX WEIGHT 220 LBS". I'm a big guy, come on.

Tomorrow evening is IKEA delivery and Friday I get internet in the apartment! I have my hotel until Sunday so everything is lining up perfectly.

A buddy from Engineering made contact with me today, turns out he is in Montreal! I revealed I was furnishing with IKEA and he revealed his secret love for assembling IKEA furniture, so we might have a drink-beer-and-assembe-furniture party.

Last point, I decided that I'm going to revive my old Facebook album "Being Domestic" in the form on a blog tag. I'll post about tasty foods, mostly homemade stuff!
Posted by Brahm at 8:38 PM

Labels: being domestic, montreal
Email ThisBlogThis!Share to TwitterShare to FacebookShare to Pinterest